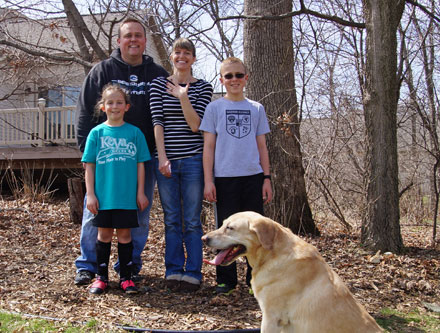 Our lost ring stories are sometimes picked up by local newspapers. Recently, the Wisconsin State Journal  ran a story on one of our lost ring hunts. The article generated some calls from people who had lost their ring years ago and wondered if we could help. The number of years the rings were lost ranged from 1 to 8 years. This was exciting, because we typically are called for recently lost rings. It was exciting to think we could find a ring that was lost years ago. If you have a good idea on where and how you lost your ring, there is probably a  pretty good chance it is still there. One of the couples who contacted me was Heather and Ron who had a lost ring in Sun Prairie, WI.  Below is their lost ring story.

Three years ago, Heather decided the weather was warm enough to do the annual Easter Egg hunt outside in her backyard. However, she first decided to do a little yard work. In the fall, she had spread leaves around her shrubs and in the planting beds. After the winter snow had melted, they remained and needed to be cleaned up. Her house sat on a wooded lot, which was convenient to dispose of yard waste. Heather spent a couple of hours gathering up the dead leaves and other yard waste and piled it up in the woods.

It wasn’t until the next day, when she was preparing for the Easter dinner, that she noticed her wedding ring of 19 years was not on her finger. Some of you might find this surprising, but it’s not uncommon to go one or more days before realizing your ring is missing. Heather was so busy trying to get ready for Easter, she did not realize her ring was missing. She did not know where or how she had lost it, so she just prayed it would show up. After a number of days, there was still no ring on her finger. Heather and Ron tore the house apart – looking everywhere. Days turned into weeks, and still no ring.

Heather sat down and tried to remember the days and events leading up to when she realized her ring was missing. She remembered the yard work and also specifically remembered not wearing gloves (and how that was probably a bad idea). Could this be the day / time when she lost her ring? She remembered doing the yard work quickly, even scooping up the leaves with her bare hands and throwing the handful piles of leaves in the woods. They quickly searched the areas where was working, but found nothing. After about a year, Heather had given up all hope that she’d ever see her ring again. The couple went to the local jewelry store and picked out a new wedding ring to replace the wedding ring lost in her backyard.

One Sunday morning 3 years later, Ron was sitting in a chair reading the Sunday paper. He was reading an article about some guy in Madison, WI who was a “Ring Finder”. He searched for lost wedding rings with his kids. Ron chuckled to himself and wondered if this guy could find help them find their lost ring in Sun Prairie from 3 years ago. He didn’t seriously think it would work, but why not give him a call? I got a call the next day and Ron and Heather told me their story. It was still winter and the ground was frozen, so I told them I’d add them to the list of lost ring hunts for the Spring. 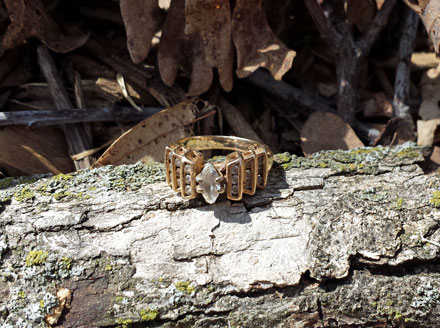 When we arrived, we were greeted by Ellie, the family dog. Not sure what it is, but it seems like most lost ring hunts involve a family dog, which my daughter Kylie looks forward to. You’ll see Ellie in the picture above. Heather showed us the planting beds as well as the wooded area she was working in. She then went inside to do some housework and Carter and I began our search with our metal detector. When we start out a ring hunt, I like to quickly scan the area and see if it’s trashy or not. Lost ring hunts around houses can be tricky, as there is typically a lot of construction debris leftover from the original house construction or a recent re-roof job. This yard was amazingly clean and I got zero signals from the metal detector while searching the planting beds.

I moved to the wooded area and started my scan of the area and almost immediately got a good string signal on the metal detector. It was close to the surface, so we didn’t get too excited. Heather’s ring was lost 3 years ago, so we were figuring it would be deep under the soil. Carter got out the pinpointer and brushed away some soil. There it was – the edge of the wedding band … it was Heather’s lost ring. We had found the lost ring! I asked Heather to come out and show us the area she was working a second time, and while she was talking, I held up the ring. She screamed … loudly.  So loudly that Ron heard her from an upstairs bedroom. “They Found It!” she hollered to Ron.

Total search time was under 5 mins, which is not the norm. For those of you keeping track, this was lost ring #14. This Lost Ring Story was also a featured story in the Sun Prairie Star Newspaper. If you know someone who has lost their ring outside in the yard, in the water, in the snow or in a volleyball court … give us a call! Doesn’t matter if it was yesterday, the week before or 3 years ago like Heather – we can find it. Please “Like” our Facebook page and you will get every Lost Ring Story delivered to you.  Remember, every ring has a story, what’s yours?