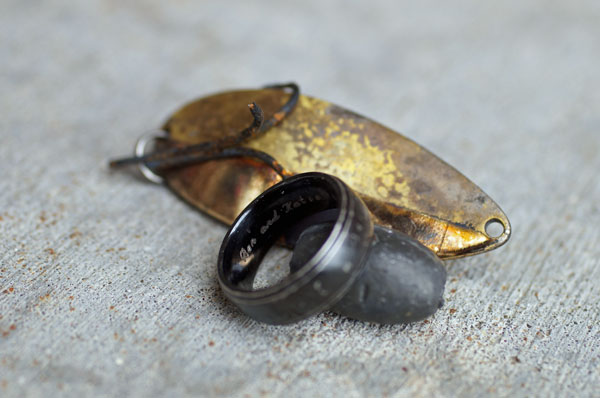 One weekend, my son and I were out in a lake looking for a gentleman’s lost ring.  Surprisingly, we stumbled upon another lost ring. This has happened in the past, but this ring had an engraving on the inside – names and a date.  Could I take this information and find the owners? One thing being part of The Ring Finders has taught me is that if you try hard enough, you can reunite people with their lost rings.

I created a simple post on Facebook, “Who wants to be a member of The Ring Finders”? Along with this post, I include the picture to the below. Interest in the post was instant. The Ring Finders was getting a lot of help from random people on Facebook.  The lost ring found its owner after 2 hours and close to a 1,000 shares. Read the testimonial below from the owners. 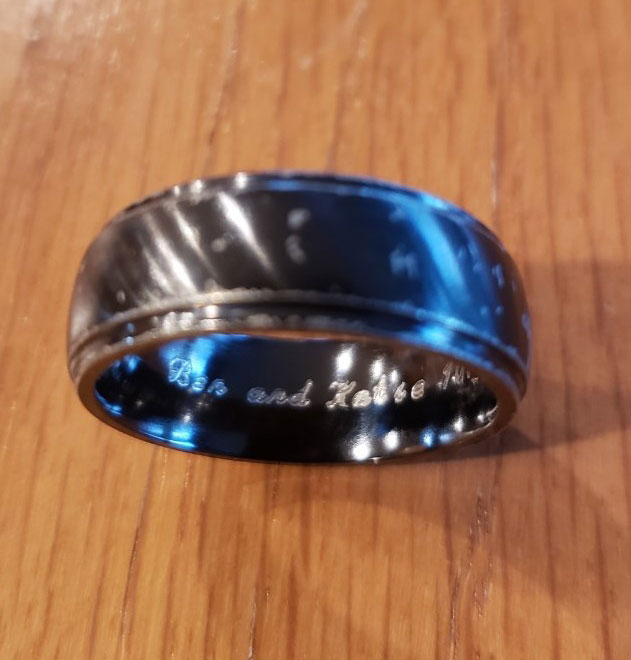 Less than a year into our marriage in the summer of 2015 my husband was out fishing on Lake Mendota with a friend. They got out to cool off in the water and toss around a football. During one of the throws when Ben went to catch the ball it caught his ring just right and sent it flying off his hand. He immediately went into shock and panic and began searching the area with his friend. They searched and searched for hours. After it seemed like there was no hope Ben looked to rent a metal detector to try his luck. Unfortunately, he was not successful.

That evening Ben finally worked up the courage to tell me he had lost the ring. It was such a heart breaking moment. Ben was so upset and afraid to admit he had done everything possible but had lost hope of ever finding it in the lake. I remember being actually somewhat relieved when he finally spit it all out that he had lost the ring because of how upset he was. I thought it was going to be something much, much worse! My first initial thought was it’s just a material object and we can replace it.

I called Chalmers Jewelers in Middleton where we had the ring designed. Since we had owned the ring for less than a year, they were willing to work with us to create the same ring for a discounted price. We made the appointment, but it soon became evident that in our hearts the original ring was just not replaceable. Ben struggled to imagine replacing the ring I had given him on our wedding day with a “replica” version. Ultimately, after some discussion we both came to the realization that this secondary version of the ring just wouldn’t be the same and we cancelled the appointment.

The Ring Finders to the Rescue

Fast forward five years to August 2020 in the midst of the COVID-19 pandemic. I can honestly say with 100% certainty the last thing we ever in a million years expected was that our wedding ring would find its way out of the lake. I received a message in the evening of August 16th from a friend of mine who said “probably not yours but on the off chance I wanted to share” with a screenshot from www.LostandFoundRing.com that showed a post looking for the owners of a wedding ring inscribed with the names “Ben and Katie” found in Lake Mendota.

My heart dropped to floor when I saw the photo – the ring was a little worse for the wear but it was OUR RING. I was in complete and total shock. When I told that friend YES it was ours she immediately tagged me in the post and I was able to get in touch with Dan, the ring finder, who told me he found our ring while out on a ring hunt for another couple.

Patience and Faith in God

We truly know this event was completely orchestrated by God. We have prayed and prayed for God to work in our families relationships and continue to keep us hopeful. To have the ring back after 5 years completely unexpected is the greatest testament to how with patience and faith God will always work in his timing. We are so thankful and appreciative. Especially, for all the people who were placed in the right place at the right time. People like Dan and his family for finding the ring and my friend who saw the post. Without them I may have never even seen myself and decided to send it to me on a long shot. We are so, so grateful!