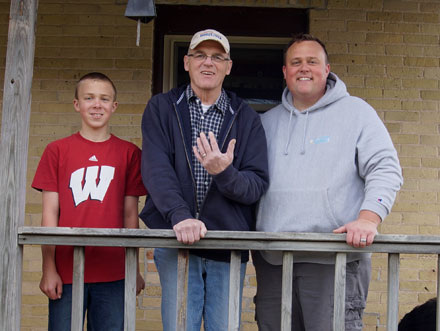 How to Find a Lost Ring

Recently, I got an email from a guy named Jim who  had lost his ring.  In the email, he explained that his daughter had recently sent him a newspaper article about a lost ring that we had found last year.  He asked if “I was still doing metal detecting”.   Yeah, I’m still doing metal detecting I responded and asked how I could help.  Jim asked how to find a lost ring on his farm.  He noticed his ring was missing one night and couldn’t remember ever taking it off.  He was doing chores around his farm, and wondered if he lost it while spreading a bale of hay in a steer pen.  He explained the weather was nice, so he decided not to wear gloves … this turned out to be a big mistake. 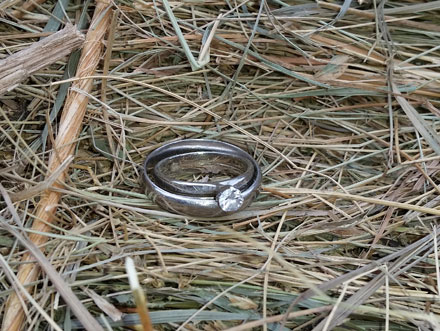 We setup a time to drive up to Briggsville, which is just outside of Wisconsin Dells and see if we could show Jim how to find a lost ring. Below is the story as told by Jim:
About 3 weeks ago on a Monday evening, I was scratching my hand and noticed my wedding ring was gone.  My wife Barb remembered that she had seen it on my finger the evening before.  Thinking back, the only activity I could recall that could have helped it come off was throwing hay out to a couple of steers. It was warm that night and I wasn’t wearing gloves. I looked around the house  and checked the gloves that I knew I hadn’t worn, without finding the ring.  The next morning I walked up and down the area where I thought it might be, but with no success.  I called a friend see if he had a metal detector.  He didn’t but borrowed a metal detector from another friend.  He walked up and down the area for over an hour with the metal detector without success. He then called the friend who owned the metal detector.  That friend asked him if he had read the manual.  You can guess the answer.  At that point I knew we were not going to find it. 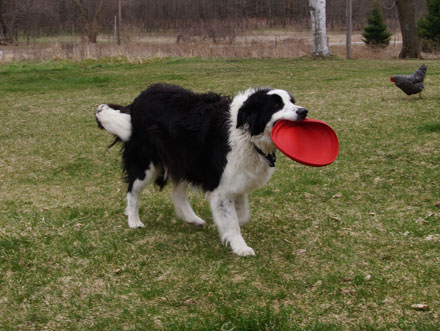 A few days later one of my daughters sent a link to Dan’s site, www.LostandFoundRing.com.  They had seen this article in the Wisconsin State Journal.  I got hold of him and we set up an appointment.  I had sent our other 2 kids a heads up on what we were doing.  Our other daughter sent a message asking if her husband had sent the info to us … he didn’t remember doing so, but was intending to, since someone in his office was telling about a friend who did ring searches.  He happened to be Dan’s neighbor … small world, eh?

Dan and Carter got here on Sunday.  Dan asked a of of good questions about how to find a lost ring … things like where I might have lost it, what kind of metal it was, and then asked to scan my wife’s ring, since they were matching. About and hour later, after covering the area where I thought I lost it, he asked me to retrace where I would have walked that evening. He and Carter then started to scan where I walked with their metal detector.  In about 5 minutes, he came over and asked me scan a section of grass with the smaller, more sensitive metal detector. That was the fun part.  You see, he had scanned the area earlier with his metal detector and found my lost ring.  However, he wanted to let me find it and see exactly where it was hiding.  I must have walked that area 25 times and never saw it. Both Barb and I were thrilled, and I think Dan and Carter were almost as thrilled for us.

I was telling my brother about finding it, and he gave me some fun grief about being more careful.. The next morning he emailed asking if Dan did water searches.  Seems that many years ago at his cottage, his son-in-law was playing with his kids by throwing them into the water and having them swim back.  On one of the throws, his daughter and wedding ring went into the water.  I just sent him Dan’s info.  Dan may get to do a search in Door County this summer!
Again, thanks Dan and Carter! 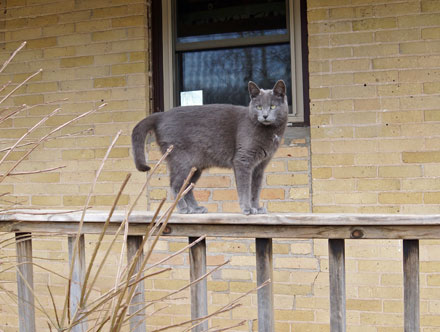 Check out the YouTube video below, Like Finding a Ring in a Haystack.  This is actual footage of Jim’s lost ring search and recovery. My favorite part of the video is when Jim finds his ring – the expression on his face is priceless and why we do what we do.  This was Lost Ring #33, but not our first “farm search”.  So, if you are reading this and have recently lost your ring – remember that it doesn’t really matter where you lost your ring, it’s more about how you lost your ring.  Write down as many facts about how you think  your lost your ring, and then give us a call at (608) 492-1070.  Please “Like” our Facebook page and you will get every Lost Ring Story delivered to you.  Also, please share this story on your Facebook page, so together we can reach more people to help find their lost rings.  Remember, every ring has a story, what’s yours?