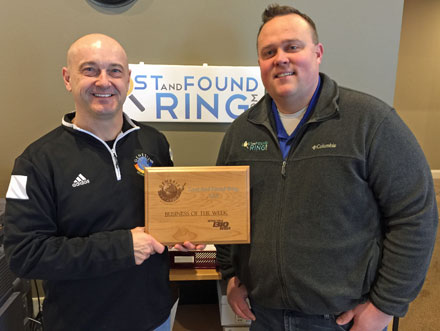 Lost and Found Ring, LLC was featured on Friday, February 9th as the Genesis Painting Business of the Week.  Each week, a different local business in Madison, WI is recognized by Genesis Painting.  As part of this, I also received a custom engraved plaque from Vondra Engraving. Pretty cool eh?  I’ve been listening to 1310 WIBA for most of my life.  I’ve always been attracted to talk radio. Probably has something to do with growing up in my dad’s shoe store, Dyer’s Shoes on State Street.  He always had NPR running in the background. While I love listening to music, the same songs over and over wear on me. So to be featured on a radio station I’ve personally listened to for years was a highlight.  Each Friday around 7:50 AM, another Genesis Painting Business of the Week is featured on air.

Didn’t get a chance to hear it live on air? Below is a link to the interview with Robin Colbert of WIBA 1310. Pretty awesome that a “guy with a metal detector” was recognized by such an amazing program sponsored by Genesis Painting.  I was able to describe how I started the business, some of the more interesting searches I’ve been on as well as my fee structure. This was my first “live” interview, so I was pretty nervous going into it. However, once I got going the time flew by.

In the short time, I talked about a search years ago for a buried cache of silver coins. A couple found an actual treasure map of their parents backyard.  In the middle was a “X” indicating a cache of silver coins. Unfornately, we didn’t find it, but I still dream about finding buried treasure to this day. Thanks again to both WIBA and Genesis Painting for being named the Genesis Painting Business of the Week!