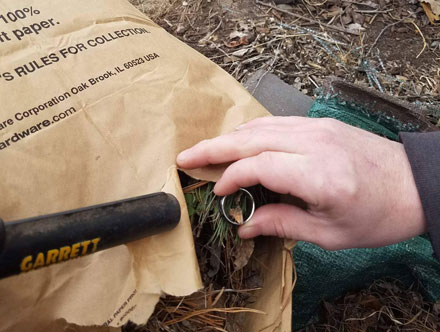 Mac called me one evening this past week looking for help. He found our website while searching for where to rent a metal detector.  Unfortunately, he was from Osceola, WI – between 4 and 5 hours away.  I have driven over 6 hours in the past for a lost ring in Webb Lake.  However, this weekend was booked and I was unable to make the drive. I absolutely hate hanging up the phone giving people no option other than to rent a metal detector themselves.  Metal detector rentals are usually low end and sometimes don’t even work. So, I hit up a couple Facebook groups I’m a member of and asked a pretty simple question, “Lost Ring Osceola – anyone able to help?”.

I almost instantly got a response, but funny thing is there is also an Osceola, IA!  After clarifying that I was looking for someone to help with a lost ring Osceola, WI, I got another response. Unfortunately, the volunteer was still over 1.5 hours away.  I followed up with Mac that he should probably start calling around in the morning to find a place to rent a metal detector.

Helping from a Distance

Connecting someone who lost a ring with someone with a metal detector is something I’ve done before.  Last year, I found a guy on Facebook who had posted a story about his lost ring in Lake Michigan.  After hearing his story of how he lost it, it sounded very likely that it could easily be found with a metal detector.  I connected him with a local ring finder who was able to find and return the ring to him.  While not as rewarding as seeing the smile first hand, still pretty cool that I was involved in connecting the guy with the lost ring with the guy with the metal detector.

Back to the lost ring Osceola, WI Facebook post.  My post was cross posted to another metal detecting Facebook group and within minutes a guy who was 12 miles away responded.  Amazing. He said he could meet the couple the next morning.  Armed with his metal detector, 5 mins later the lost ring was found.

Be the Reason Someone Believes in the Goodness of People 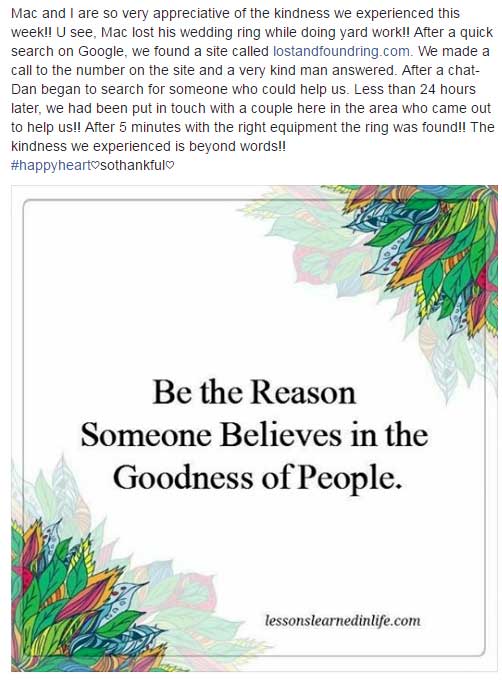