When asked why people love living in Wisconsin, many people will say the change of seasons. I personally love the crisp jeans and sweatshirt fall weather.  However, summer in Wisconsin is a close second. This past weekend was Father’s Day, and my only request each year  is to spend some time metal detecting. I do not get much time to “hobby hunt”, so I cherish the opportunity when I have it.  The Madison Lakes have been calling my name for weeks, and I finally jumped in with my waterproof metal detector this past weekend. 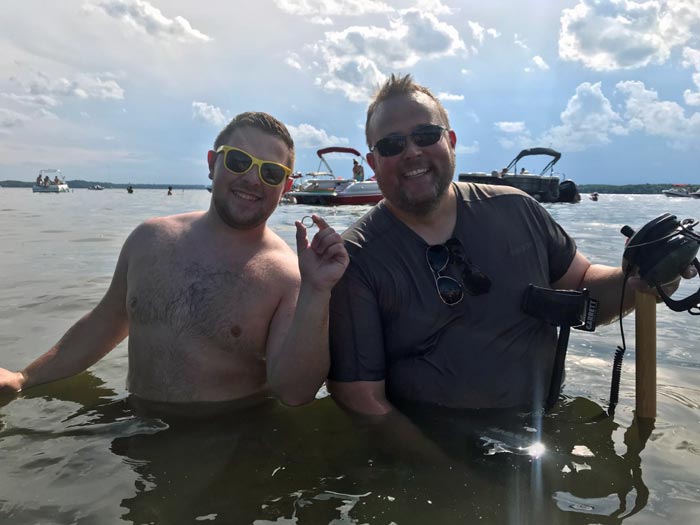 Occasionally, I look back to a list of lost rings I did not find when looking for a place to metal detect. This past weekend, I broke out my waterproof metal detector and hit a spot to see if I could get lucky. Metal detecting for lost rings in the water can be tough. Everything starts to look the same in open water, as there are no reference markers. I often return to the spot with people, and they quickly realize they have no idea where their lost ring dropped in. Sometimes all you can do is keep returning to the general location and see what you can find.

While out metal detecting, a guy approached my son who hunting with me. He said he just lost his wedding ring in the water and wondered if we could help with our waterproof metal detector.  I was immediately skeptical, as this is a very common thing for people to say when they see you metal detecting in the water. “Hey, if you find something valuable – it’s mine!” I quickly knew he was serious by the look on his face. He was not joking around.

The guy was part of a large group of people, all very nice and extremely inquisitive. How far down does that go? What’s the coolest thing you’ve found? Is that waterproof? (some questions were better than others … haha).  My son actually gave one guy a quick lesson with his detector. This search had the benefit of having a boat anchored nearby – so we had a nice reference marker on where they were standing. Three or maybe four bottle caps later, I pulled his lost wedding band up from the water.  This was lost ring #94 we’ve found and returned. 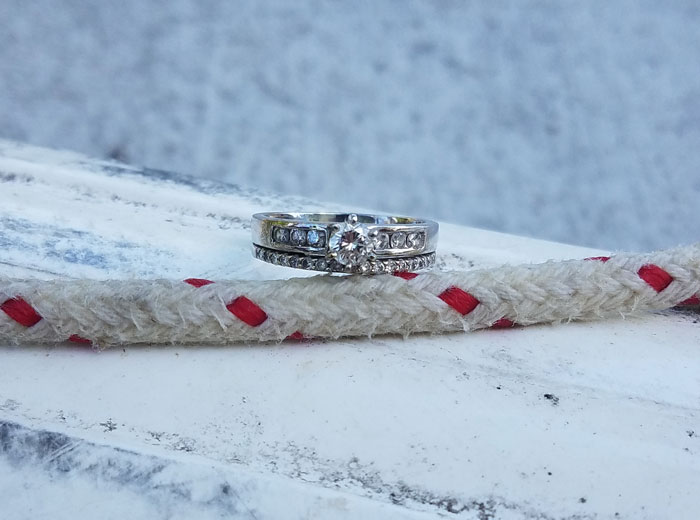 Last year, I got a call from a guy looking to rent a waterproof metal detector. This type of request isn’t usually someone wanting to just hobby hunt. I explained that I actually don’t rent metal detectors, but rather hire myself out with a high end waterproof metal detector. He was so happy, because he said he wouldn’t know what to do with one anyways! His wife had recently watched her wedding ring take flight into the water from their boat. They did not panic, and immediately dropped a weight with a buoy attached to it to mark the spot.

The boat ride out to the location took longer than the hunt in the water.  The ring was literally a foot away from the marker. First signal, first scoop and boom the lost ring was found. Seeing as we had some extra time, I figured why not search a little more? Maybe we could find a keeper or two? We quickly called it a day, when turtles kept brushing up against us underwater. We must have been stirring up the bottom, which was pretty mucky. I love metal detecting in the water – but not with turtles!

I hope you enjoyed these two stories of lost rings being found with a waterproof metal detector. If you know someone who lost their ring in the water – no matter how long ago – have them give me a call. I’m currently making plans to go out to look for a 50+ year old ring that fell in 2 years ago. Fingers crossed, it’s right were it fell in. Stay tuned and hopefully I will be able to report another success story.