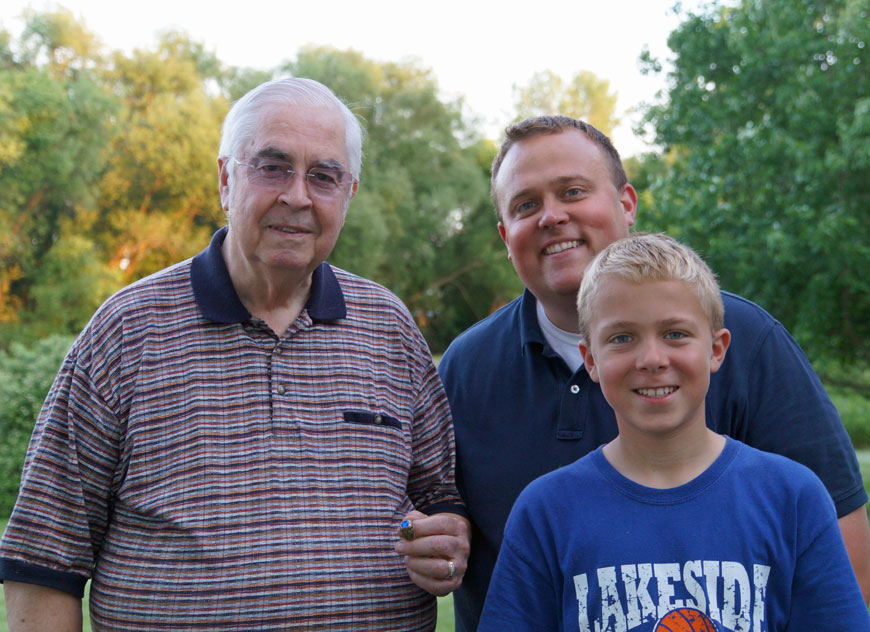 I received a call from Arnie on Monday, June 15th.  He explained that he had read the article in the Wisconsin State Journal which ran a couple of months back by Doug Moe (The Man Who Finds Lost Rings).  The article talked about how we got our start as Ring Finders.  Arnie wondered if we could help him find his lost class ring.  He was doubtful that we would find it, but thought it was worth a shot and gave us a call. 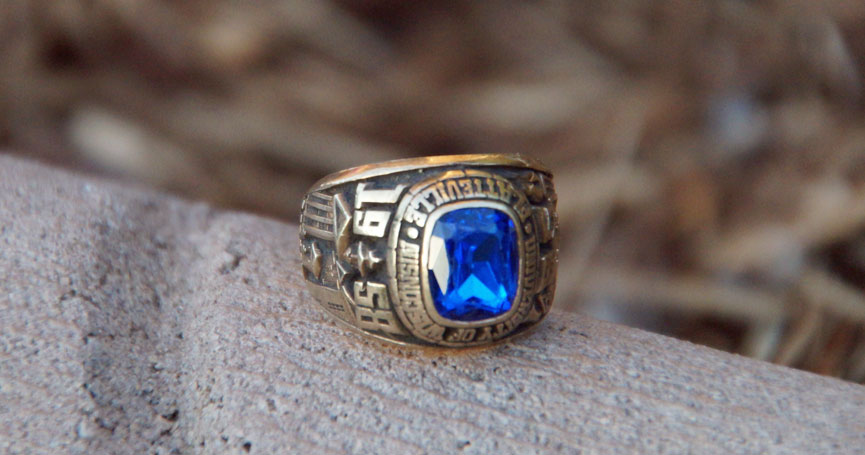 Four years ago, Arnie was clearing some brush in the back portion of his lot.  He had a pile of weeds and when he went to toss the pile in the back corner of his lot, he felt his ring fall off along with the pile of weeds.  He immediately searched for the class ring, but had no luck.  This is a common story I hear – it’s amazing how fast a large, gold ring can go completely out of sight.  You would think it would stick out, but all it takes is one wrong step – and your shoe pushes it down into the soil, never to be seen again.   A couple of days later, he went to a local tool rental store in Madison and rented a metal detector for $30.  Arnie told me later, “I might as well have been swinging a baseball bat, cause I didn’t know what I was doing!”  Also, when he returned it he questioned the worked on the detector, as it didn’t see to be working right.  The employee confirmed that the detector was not fully operational.  Unfortunately, this is also a common story I hear.  Tool Rental stores typically rent very low end, cheap and poorly maintained metal detectors.  You might get lucky, but based on the stories I’ve heard, you’re much better off calling someone like us, who has years of experience and all the right equipment for the job (Don’t Rent a Metal Detector, Rent a Ring Finder).

“I might as well have been swinging a baseball bat, cause I didn’t know what I was doing!” 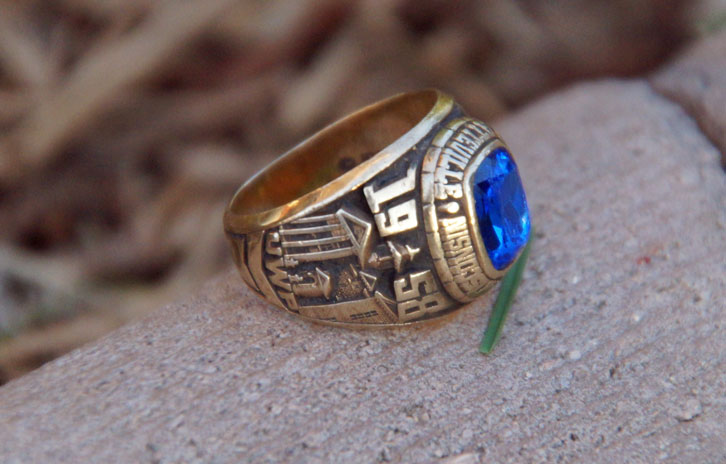 Arnie then was left wondering if the metal detector was ever working when he was searching his lot.  Could his class ring still be there?  It had to be, Arnie thought.  Where else could it have gone?  Left with no other real options, Arnie accepted the fact that his lost class ring was likely never to be seen again.

The ring was a class ring he received after graduating from UW Platteville with a civil engineering degree in 1958.  The class ring was made out of 10k gold and had a large blue center stone.  Arnie wore the ring routinely, and he explained there were many memories that went along with the ring.  After reading the article in the State Journal, Arnie again wondered if it was possible to find his class ring.

We did not waste any time, and the next day headed over to Arnie’s house in Cottage Grove.  Like on almost every ring hunt, I brought my crew, Carter and Kylie, my kids.  Upon arriving, it took us a couple mins to assemble our metal detector, as it was still in pieces from a recent trip to California.  We packed it hoping to find California gold … but ended up with only $3 in loose change.   While getting ready, Kylie found a neighbor dog named Charlie (which seems to be a common occurrence on ring hunts).  Arnie then took us to the back of his lot.  On both the right and left sides were tall grass (like 4 to 5 feet).  I said a silent prayer hoping the lost class ring was not in the tall grass, as detecting that would be nearly impossible.  In the center was a nicely mowed and maintained grassy area.  Arnie re-enacted that day 4 years ago, explaining that it was likely in a 10 x 10 foot area.  Nice, we thought – small area, away from the house and the typical construction debris that goes along with the perimeter of the house.

I gridded out the 10 x 10 foot area, methodically searching the entire section.  We found one small metal tent stake, but no ring.  I then began to expand the search area, and after 3 to 4 passes, we got a hit.  Everything was right about the signal.  It was in the gold range, it was a strong and loud signal (likely due to the size of the lost class ring) and it was only a couple of inches below the surface.  I was so sure, I took off my headphones, set my detector down and handed the video camera to my son to record the recovery. Watch the video below to find out if I was right, and to see Arnie’s reaction to what we found.

Have you lost your ring?  Was it today, yesterday or 4 years ago like Arnie?  Give The Ring Finders a call and we will put that lost ring back on your finger. Please “Like” our Facebook page and you will get every Lost Ring Story delivered to you.  Remember, every ring has a story, what’s yours?