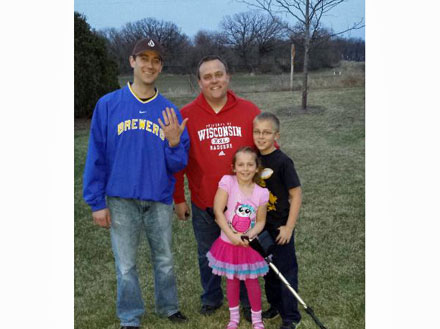 I often talk about my lost ring adventures with people at work.  Like most people, they love hearing the stories of lost rings, both lost wedding rings and lost engagement rings, being found and returned to their owners.  Every ring has a story and is so much more than just a piece of jewelry.  One day, Jason stops over and tells me that a friend of his lost his ring in his backyard.  He wanted to know if it was ok to give him my contact information and inquired about what I charge. I explained that I ask for a small fee to cover gas and my time, and then a discretionary reward of what the person feels our service and the ring is worth.  We then use this money to pay business expenses (insurance, fees, marketing, etc.) as well as purchase new equipment.  We don’t really do this for the money, rather to help out people in need of our help.

Threw More than a Football

A couple of days had passed, and I hadn’t heard anything from Jason’s friend.  I asked if he had found the lost ring.  Jason said he had not, and would remind him to give me a call.  Jason had heard all of my stories and knew that we could probably find the ring pretty easy, given how it was lost.  His friend Ryan was playing football with his kids in his backyard in Fitchburg.  On one throw, he actually felt and saw his wedding ring fly off and land on the ground.  Unfortunately, he wasn’t able to find it.  In my experience, what typically happens when someone begins to look for their lost ring, is that they inadvertently step on it – pushing it into the ground.  No matter how hard you look with your eyes, you’ll never find it without a metal detector.

Another week passed, and I again asked Jason if Ryan had found his ring.  He said that he had not, and this time just sent Ryan a text message and included me on it.  I responded directly to Ryan and we scheduled time for that night and take a look.  As I typically do, I brought my kids along who love metal detecting and ring hunting.  I talked with Ryan before beginning the hunt.  He explained how he had lost the ring and that he was determined to find it himself.  He had told his kids that if they found his ring, they could have ice cream as a reward.  Funny, right?   He also had thoughts of renting a metal detector, but wasn’t sure he would know how to operate it. I explained that he made a good decision to not rent a metal detector.  I’ve heard countless stories of people renting a metal detector and getting excited the first time it goes off.  However, a typical home owner would be shocked how much junk is hidden under your yard.  Most people get discourage after digging junk after piece of junk … until they give up and consider the ring lost forever.

I will never forget this hunt, because it was, and still currently stands, as our fastest recovery to date.  Ryan pointed to the area that he was standing when he threw the football, and literally within 3 mins we had a signal.  We could not see the ring with our eyes, and had to use a small shovel to pry up the ground … out popped Ryan’s ring.  He was in disbelief, as was his wife … Ryan said, “You’ve got to be kidding me” probably 4-5 times.   It took longer to take our picture and post it to Facebook than it took for us to find his lost ring!

This was Lost Ring #5! If you are reading this and lost your ring today, last weekend or 10+ years ago, please give us a call at (608) 492-1070. Write down as many facts about how and where you lost your ring.  These are so important and can be the deciding factor in whether your lost ring is found or will remain lost forever.  This hunt only took 3 mins and amazingly we were able to return Ryan’s lost ring back to his finger in record time.  Please “Like” our Facebook page and you will get every Lost Ring Story delivered to you.  Also, please share this story on your Facebook page, so together we can reach more people to help find their lost rings.  Remember, every ring has a story, what’s yours?