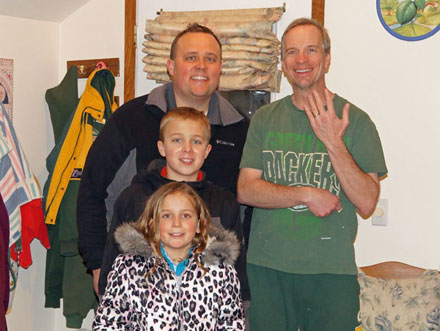 Typically when winter rolls around, the Lost and Found Ring business slows down quite a bit.  People aren’t as active outdoors as they are during the summer.  We still get one to two calls for a lost ring in snow after every major snow fall, as it is very common to lose your ring while shoveling without gloves.  The combination of cold and the motion of throwing snow often results in a call to a Ring Finder.  This call was a little different.  John had been playing in the yard with his dog, except it wasn’t just any dog – it was his guide dog.  I will let Judy, his wife, tell the rest of the story below:

My husband was helping me carry groceries from the car one evening when I noticed he seemed upset about something. I asked him what was wrong. He said that while I was shopping he was working on the computer and noticed that his wedding ring was missing from his hand.

I told him not to worry about it, after all hadn’t he recently scoffed when I had my own ring repaired that he couldn’t understand why we still bothered to wear wedding rings since we’d been married 25 years, everyone knew we were married, and it wasn’t like we would ever split up. A marriage is not a ring, I reminded him. A ring is just stuff. But John was clearly deeply upset. So I headed outside with a flashlight to search in the snow in the spot where he thought he’d been standing when the ring fell off his hand.

John is blind, and for many who are blind losing things is a regular part of life. One does not notice the gloves left behind in a friend’s car or the red-and-white cane left on the seat of a city bus. One is unable to see the phone that slips out of a pocket to fall silently into the snow or the keys that drop without a sound. Losing things is one of the recurring indignities of losing your vision and so it is for John. Misplacing things leaves him tense and frustrated, as if blindness has just scored another point leaving him scrambling once again to keep possession of the things in life that are most valuable to him, the intangible most of all.

John thought he may have lost the ring while playing with his guide dog in the snow but when I searched the spot with their footprints I didn’t see anything glinting in the flashlight beam. He was afraid the ring may have slipped off his finger while they were at work on campus, maybe while taking a mid-day break to play a game of tug-of-war outside the physics building. In fact he wasn’t sure when he lost the ring as he can’t see his hand. It may have been gone for weeks he feared.

That night he was sleepless over the loss of the ring. Even though I kept assuring him it was no big deal, it could be replaced, he was not consoled. Blindness was winning again.  First thing in the morning I started calling around to rent a metal detector, but soon realized this was not a feasible plan.  We’d be dragging the detector all over the city as there were several spots where John thought the ring might have fallen into the snow. And there was no guarantee we’d even figure out how to use it properly. 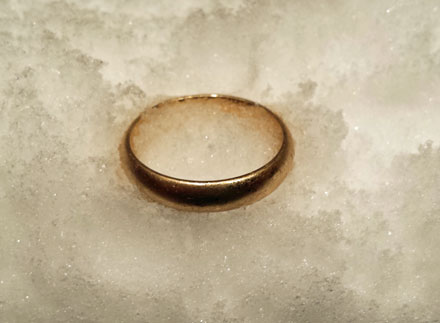 I kept putting on my coat and boots, going outside, searching the spot on the hill where John said he’d been standing when he thought the ring might have slipped off his hand. I’d get down on my hands and knees, search every inch of the frozen grass and snow, searching again and again. I had to find that ring! I had to see my husband happy again.

While searching for a local store that rented metal detectors, one of the hits that came up on Google was Dan’s Website. I exchanged a few messages with Dan Roekle and it was clear he was our best bet for finding the ring.

Dan and his kids came over to our house after work with their metal detector and other equipment in tow. We didn’t think there was much chance of finding the ring that evening as it was already dark, not to mention bitterly cold. But Dan wanted to get started and at least get a look at the first search site. Anyhow a Midwestern blizzard was bearing down, predicted to dump a half-foot of snow on the city, obliterating any tracks of where John and his dog had been.

I turned on the house lights, opened the garage door to flood the driveway with light and passed out flashlights. A group of us huddled in the cold to watch as Dan dropped a wedding ring made of the same metal as John’s onto the frozen trampled ground. The detector chirped, its screen lit up with a digital reading, and Dan began slowly making his way up and down the hillside, maneuvering the detector over snow and ice, listening for a tone similar to the one triggered by the test ring.  The detector softly chirped every few moments as Dan passed a tree and he theorized that landscape stakes or discarded nails from a roofing job were to blame. “There’s a lot of metal in this hill,” he said.

It was clear John and I would have never been able to locate his ring with a rented metal detector. He’d been guiding the detector over the ground for only about five minutes when it chirped loudly and Dan announced a reading in the range of the test ring. “We’ve found it,” he said with certainty and you could almost hear the gasping of all the frozen breaths. His son Carter knelt in the spot where his dad and the detector pointed, and with a water-proof pin pointer worked to zero-in on the precise location of the ring in the snow. Carter scraped and dug through the snow and ice and within moments held it up as a whoop arose.

I may have been the most astonished as the ring had been pressed into the frozen earth in the exact location where I had searched on my hands and knees many times that day without spotting it. It was the spot where John had been standing when he pulled off his gloves after playing with his dog and leaned over to pick up the harness.

Thank you, Dan, Carter and Kylie!

This is one of my favorite Lost Ring Stories.  John and Judy were great, and we were so happy to be able to help return the lost ring.  As with most hunts, there is always more than just a lost ring.  There is a story behind the ring, memories and emotion.  For those of you keeping track, this was ring #12!

So, if you know someone who has lost their ring outside in the yard, in the water or in the snow … give us a call!  Doesn’t matter if it was yesterday, the week before or 10 years ago – we can find it. Please “Like” our Facebook page and you will get every Lost Ring Story delivered to you.  Remember, every ring has a story, what’s yours?

This story was also feature in a article in the Wisconsin State Journal, “The Man Who Finds Lost Rings”, by reporter Doug Moe.