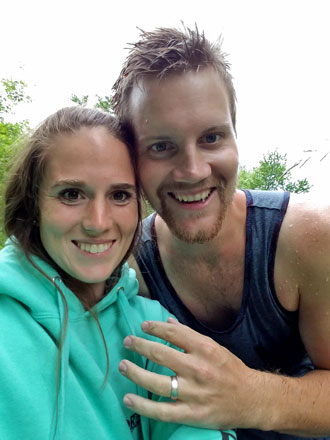 The call actually came from a salesman at Kessler’s Diamonds in Madison, WI. He had a customer who had lost his wedding band the day before and was looking for help.  I was pretty impressed that the salesman’s first thought was to help find the lost ring.  He could have easily just tried to sell him a replacement ring.  Not sure if he had read a story on us in the newspaper or if he Googled something like cost to rent a metal detector?  Either way, I picked up and gladly answered his questions.  After a few mins, he handed the phone over to Matt, his customer, to make arrangements for a search.

One thing my previous lost ring hunts in rivers has taught me, is getting to the spot the ring was lost is sometimes the hardest part. Matt had a pretty good gut feel where his lost ring in Sugar River was, but he wasn’t 100% certain. I asked Matt to find a spot to get in the water as close to this spot as possible.  Last thing I wanted to do was drive an hour there and back, and not be able to get in the water. Matt and a buddy headed down and quickly found a perfect spot to jump in.  They spent between 1 and 2 hours that night trying to find the lost ring in Sugar River with their hands and the aid of goggles.  Unfortunately, it was just too big an area and the sand / muck was just too thick.

I was ready to head down, but was delayed by a number of severe storms.  Amazingly, the Sugar River area avoided much of the rainfall as these storms passed through WI.  Who knows what an inch of rain would have done to the river level and speed of the current.  Lucky for us, this turned out to not be an issue.

I was able to secure permission from the Village of Albany to use a gravel road to access the spot to get in the river. Even though it can take more time, it is always a good idea to make sure you have permission to conduct a search.  I will let Matt’s wife, Thalassa, tell the story how we found a lost ring in Sugar River, WI.

How to Find a Lost Ring 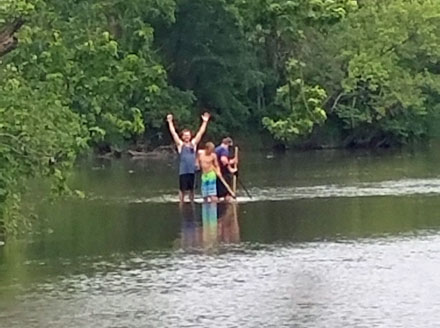 “Talk about a crazy 5 days!!!!! So this last Saturday we went tubing down the Sugar River. We had a great time until we stopped to play some football. After awhile, we decided to keep going down the river and at that time Matt noticed that his wedding ring was gone! Talk about going from an amazing day to a very disappointed day. We figured it was gone and headed home. Matt went into Kessler’s on Sunday morning. Kessler’s unfortunately couldn’t replace the ring, but instead of trying to sell us another ring they were very helpful. They gave us a number of this guy that they had heard of who had found a lost ring with a metal detector.

Matt called and talked with Dan from www.LostandFoundRing.com. Matt talked to him and he said he could possibly help as he has a underwater metal detector.  First, he wanted Matt to try and find a way to get to the spot he thought he lost his ring.  So on Tuesday, Matt and Michael went to look for the lost ring to see if they could possibly even find a spot to access the river from the road. They were able to find a nice path that led right to the exact spot Matt thought he lost his ring!!

Mike and Matt both searched and searched but unfortunately they didn’t find anything but a pair of sunglasses. Matt got done with work today and when he got home I could tell he was very discouraged.  He had gotten a text from Dan the lost ring finder that said he would meet Matt today to go search for the ring. Matt really didn’t want to go, but both of our guts told us we needed too. 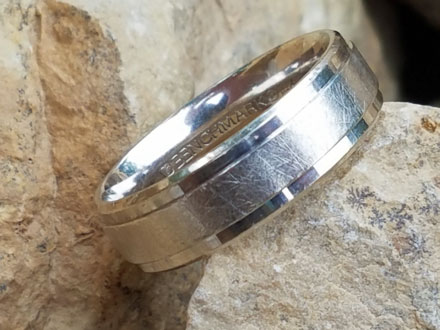 I am still in shock and can’t believe Matt’s ring has been found. Everyone kept saying your never going to find it. It is like finding a needle in a haystack. I think it was even worse, it was like finding a lost ring in Sugar River! We couldn’t have done it without you Mike for keeping our hopes high … and Dan and his son Carter from www.LostandFoundRing.com.

Please Share this story so people know that there is hope!”