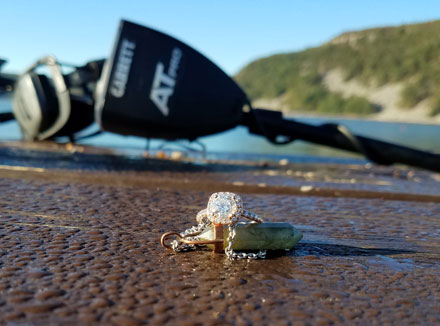 I got a call a couple of weeks ago for a lost ring at Devils Lake State Park in Baraboo, WI.  I asked my typical questions.  How did you lose the ring?  Is the ring material gold?  Is the depth of water below 6 feet?  Was the ring lost at North Shore or South Shore beach?  You see, I’m very familiar with finding a lost ring at Devils Lake. I have been on 3 lost ring hunts and found all three rings.  The couple found me by searching for where to rent a waterproof metal detector and found my website.

After the couple answered all my questions, they mentioned one more thing. The value of the ring was more than $10,000. Excuse me? I had never searched for a ring this expensive before.  Ten thousand dollars was more than my first and second cars … put together!  My mind couldn’t stop thinking about 10k sitting at the bottom of Devils Lake waiting to be found. Unfortunately, I was busy that day and wouldn’t be able to search until the next day.  I secured the proper paper work required to operate a metal detector in a state park. This is something that I do not take lightly.  I’ve actually been stopped and asked for the paperwork on a past hunt.  I happened to be 30 mins past the allowable time limit at the time, and had to pack up and leave.

I packed up my waterproof metal detectors and jumped in the water.  After a couple hours and a couple dollars in change, I came in for a break.  I again talked through the details with the couple to be sure we were in the right spot.  The past day, I instructed them to throw a pocket full of change down where they thought the lost ring at Devils Lake was.  This way, I would know I was in the right general area.  Unfortunately, not only had I not found the ring, I had not found the cache of coins with my metal detector. Ten o’clock came too fast and my permit to use a metal detector had expired. Time to pack up the metal detectors and go home. 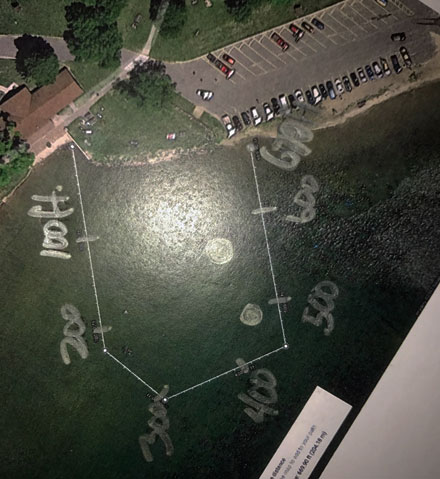 I wasn’t about to give up, but I would have to wait until the following weekend. It was late in the  year and the sun goes down too early to hunt at night.  The couple was worried someone would eye ball the ring and claim finders keepers.  I reached out to a metal detecting group I am a member of to seek out some help.  Bill responded and offered to come down and help mid week.  He drove quite a distance and like me, searched almost 4 hours without any luck. Had the lost ring at Devils Lake already been found?

The following Saturday, I woke up early … like 4:00 am early.  I wanted to get ready and be at the park at 6:00 when it opened. This would likely be my last attempt.  Combined, we had already searched with metal detectors for more than 8 hours.  The couple, Danni and Ellie had also logged many hours of searching themselves. I asked the two ladies to retell me the story one last time.  She explained that she took the ring off and put it on a chain to “keep it safe”.  She then did a handstand to show off, but felt the chain slip off over her head under water.

When I was hunting, I remembered three different bases under my feet.  One was weedy, one was mossy and one was sand.  Ellie distinctively remembered the bottom being sand.  Sandy bottom was my target search area. After a couple of hours, I hit pay dirt. My metal detector screamed. One scoop and there at the bottom was a 1.5 carat diamond engagement ring. 4 for 4 baby!

Here is the link to the WKOW ABC Channel 27 News Story.  This includes a short clip of the actual moment I returned the ring.

Here is the full lost ring return video. I surprised them with the lost ring, but had them tell me the story how they lost it first.  Pretty amazing reaction, eh?